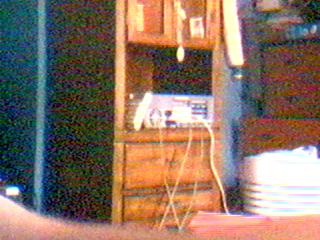 Roto-Router has lived a long and varied life. Starting out as a mere 486sx running Windows 3.1 on its 170M hard disk, it served as a training ground for the security guru Blake R. Swopes (AKA, Golden_Eternity).

For a time, Roto-Router (seen here) was all but forgotten, but found new purpose as an internet gateway and server in November 1999. Roto-Router (now sporting an Intel math coprocessor and a 1G Western Digital hard disk) served as the primary gateway, web, mail and name server for the BhodiSoft.com network (The-Well.lan).

In the middle of 2000, Roto-Router yielded over its web server duties to an Aptiva P200, which had a larger hard disk and could therefore handle the SQL server needed by the developing BhodiSoft web site.

After a summer of power failures (The California Power Emergency of 2001), Roto-Router was left behind as administrator Swopes moved to San Diego, where he had found work as an IT Manager.

They say flames burn brightest before they die, and in the case of Roto-Router that may have been true. With only minimal intervention by Swopes, Roto-Router struggled on to reach more than 150 days uptime, a very impressive feat rarely seen outside of controlled server rooms with uninterruptible power supplies.

Swopes admits he saw signs of Roto-Router’s failure in the weeks leading up to the tragic event. “There was a local root ptrace exploit that I hadn’t fixed because it would mean a kernel recompile and a reboot. It was only a matter of time…”

Swopes also told of problems compiling services on the server, which he attributed to library compatibility issues. “It should have compiled! It just isn’t fair!!”

When asked about the future, Swopes said he didn’t know what he would do… “Its just too soon. I really wanted to see 180 days, though. Maybe its time for a recompile and a UPS.”

I have sad news to share with you all… Roto-Router, which so recently celebrated 150 days uptime, has suffered a trajedy.

I’m still investigating the circumstances surrounding the unfortunate loss of uptime (*sniff*) but based on the evidence (rr wasn’t hooked up to a ups), I suspect a power failure.

Condolences can be sent to the administrator at [email protected]….

[Edit July 2003: This email address is no longer valid]

Welcome to the ORIGINAL BhodiSoft.com! Coding since '96, on the web since '00. Accept no substitutes!